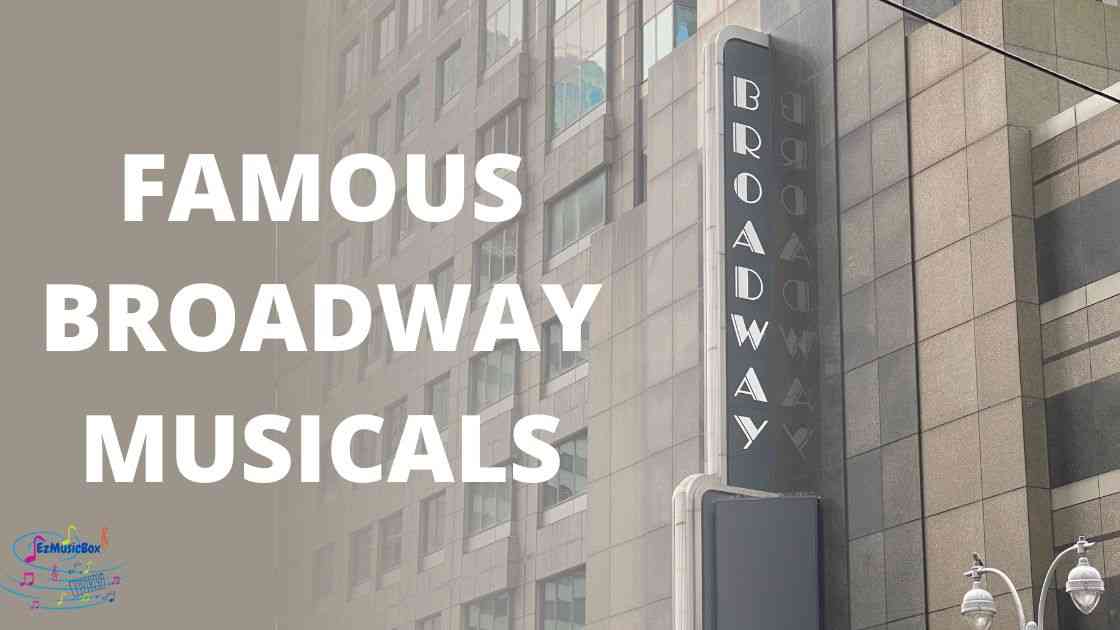 No discussion of American popular music would be complete without the mention of Broadway musicals. We all know several famous Broadway musicals such as Oklahoma! (1943), West Side Story (1957), Chicago (1975), Phantom of the Opera (1986), Hamilton (2015), etc.

The Broadway musical is a form of American popular musical theater that emerged in the early 1900s. Most of the dialogue in a musical is spoken, but the emotional high points are sung.

A Brief History of Broadway Musicals

The earliest Broadway musicals were written by American-born musicians, most notably,

The collaboration between composer Richard Rodgers (1902-1979) and lyricist Oscar Hammerstein (1895-1960) marked the beginning of a golden era for American musical theater. In the 1940s and 1950s, this gifted team produced a succession of blockbuster musicals. The Rodgers and Hammerstein team created many alluring songs by combining harmonious lyrics with inspiring melodies, like “Oh, What a Beautiful Mornin'” (Oklahoma!), “Some Enchanted Evening” (South Pacific), “Climb Ev’ry Mountain” (The Sound of Music), etc.

Around the turn of the twenty-first century, Broadway was dominated by the mega-hits of Englishman Andrew Lloyd Webber. Shows like Evita, Cats, Wizard of Oz, and Phantom of the Opera showcased not only enchanting melodies but also dazzling stage effects.

As time passes on, Broadway musicals have become more diverse including several categories:

What is an Off-Broadway Musical?

Simply put, the musical productions have theatres with a range of 99-499 seats are considered Off-Broadway.

There are many popular Broadway Musicals. The Tony Award for Best Musical is given annually to the best new Broadway musical since 1949.

Currently, the most popular and still-running top seven musicals are:

To get to the core of the Broadway musical, let’s examine three of the most acclaimed shows.

Debuted in 1975, Chicago is an American musical with music by John Kander, lyrics by Fred Ebb, and book by Ebb and Bob Fosse, The musical Chicago was set in the legendary city during the jazz era 1920s and based on real events.

Chicago was met with mixed reviews upon its 1975 premiere. However, in its 50 years of the saga, the musical, its songs, and its choreography have all become an iconic part of Broadway history. The current production celebrated 25 years on Broadway in 2021 and it is still running.

Inspired by the jazz music of the 1920s era, Chicago incorporated many different music styles. It has the jazz classic “All that Jazz,” the opera-like “A Little Bit of Good,” carnival tune “Razzle Dazzle,” and the Rhythm & Blues (R&B) piece “We Both Reached for the Gun.” These styles of music reflected the music of the 1920s and relevant social issues.

The Phantom of the Opera

Andrew Lloyd Webber is the most successful of all musical composers, at least in terms of profit and public recognition. One of his most famous musicals is Phantom of the Opera. It debuted in London in 1986 and then opened in New York two years later. Indeed, the Phantom has achieved a success unrivaled in the history of musical theater and it is by far the longest-running of all Broadway musicals.

It features beautiful tunes, lush and romantic orchestrations with powerful brasses and surging strings. Combining memorable songs such as “Music of the Night,” “Think of Me,” and “Angel of Music,” with spectacular stage effects, the production fashioned an unforgettable experience for the audience.

The biggest smashing show, Hamilton, opened on Broadway in 2015. Composer and lyricist Lin-Manuel Miranda created this blockbuster musical in a span of seven years with care and attention to historical details.

Hamilton is a story of Alexander Hamilton, an immigrant from the Caribbean who became George Washington’s right-hand man during the American Revolutionary War, as well as the first U.S. Secretary of the Treasury. Even though it is a historical tale, Miranda told it with energized fast-paced hop-hop and more traditional musical fare R&B.

We perhaps could attribute the success of Hamilton to Miranda’s ability to interweave rap and R&B perfectly and beautifully. He subtly weaved an R&B melody with agile rapping around sweeping strings and chorus-line backing vocals, like songs “You’ll Be Back,” “Right Hand Man,” and “The World Was Wide Enough.”

Hamilton contains almost no dialogue. However, its music and lyrics struck such a universal chord with people, that it became a sensation.

Originally, Broadway musicals were mostly productions on New York theatrical stages or other large cities nationwide like San Francisco, Chicago, etc. Today, the musical has gone global. It is moving toward general themes appealing to an international market.

Many famous Broadway musicals are getting on the big screen. While nothing beats seeing a live performance on stage, many movie musicals capture the magic of big and extravagant Broadway musicals, thus further popularizing the musical genre at the international level.