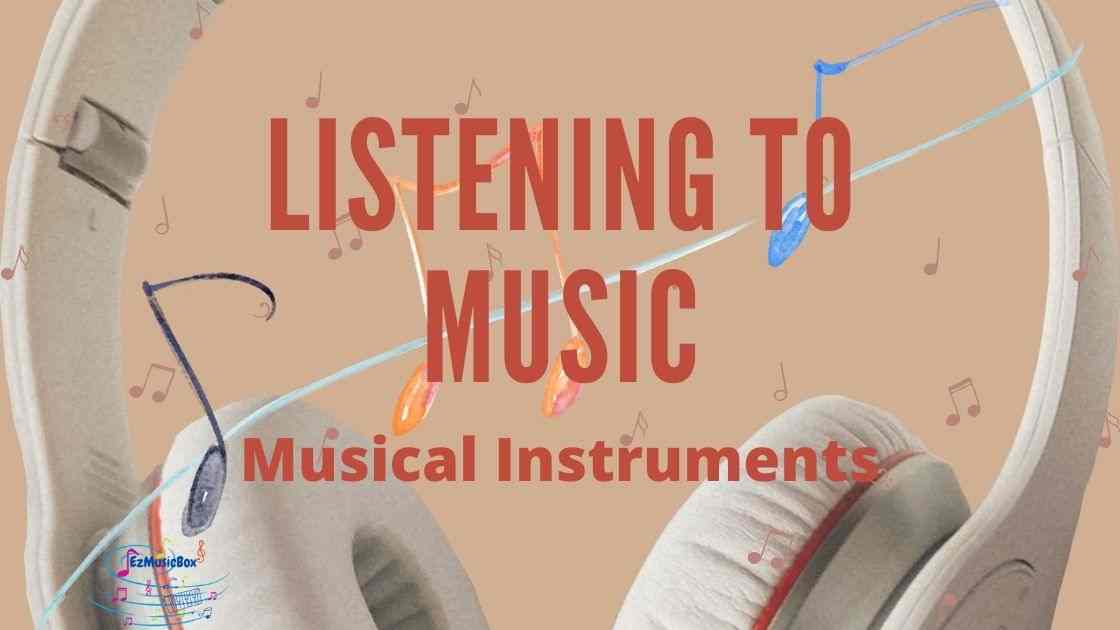 Musical instruments come in groups based on having the same basic shape and same materials. All cultures have their own music and instruments. In this post, we are focusing on the instruments used in Western music.

The Western musical instruments usually are divided into five groups:

Strings are the most dominant musical instruments around the world. Specifically, in the Western symphony orchestra, violins, violas, cellos, and double basses constitute the core string group. All these instruments generate sounds, in the same way, using a bow drawn across tight strings.

The violin is the smallest among the string instruments. It has the shortest strings and hence produces the highest pitch. It is the soprano voice in strings. The tune routinely sounds in the highest part of the musical texture, therefore in an orchestra or an ensemble, the violin usually plays the melody.

The viola produces a lower pitch sound than the violin. It is the alto voice in strings. Its tone is darker and richer than that of the violin.

The cello is a much larger instrument compared with the violin and viola. The player sits with the instrument placed between the legs. The cello produces a much lower pitch than the viola and provides an incredibly rich and expressive tone.

The cello not only provides a low bass sound but also a lyrical melody as well.

The double bass is the largest and generates the lowest sound in the string family. The double bass came from the original use of the instrument in the orchestra because it merely doubled the notes of the cello an octave below.

In modern days, the double bass is used in orchestra and jazz bands to help set a solid bass for musical harmony.

The harp is sometimes added to the modern symphony orchestra for its special effect glissando, a rapid run up and down the strings that create energized sound. Instead of bowing the strings like other string instruments, you pluck the strings when you play the harp.

The primary musical instruments in this group include flute, clarinet, oboe, and bassoon. The name woodwind came from the nature of how these instruments emit sounds, by air blown through a wooden tube or pipe.

Woodwind pitch depends on the volume of air that is vibrating. For most woodwinds, the player changes pitch by opening and closing holes along the instrument’s length to adjust the air volume.

We all love the silvery tone of the flute that sometimes is rich in the lower register and other times is light and airy at the top. Especially, it provides agility to the player and allows rapid moves from one range to another.

The piccolo is the smaller cousin of the flute. The piccolo can produce high pitch piercing sound that can always be heard, even during a loud orchestra moment.

The clarinet has a single-reed fitted to the mouthpiece. When the player blows air under the reed, it produces an open and hollow tone. It can be mellow in its lower notes but shrill in its high ones. The clarinet allows to slide or glide smoothly between pitches which offers really expressive music.

The oboe looks similar to the clarinet. However, Oboe has two reeds with an air space in between. When the play blows air into the instrument through the double reed, the vibrations create a rasping and penetrating sound.

Oboe has a close relative, the English horn. The name English horn could be misleading because it is neither English nor a horn. The original name is cor anglais and it is a transposing instrument.

The oboe has a higher-pitched sound (a C instrument), while the English horn features a more smooth, darker sound (pitched in F, a perfect fifth lower than the C). They both feature the same keys and fingerings, and usually, a musician can play both.

The cello of the woodwinds is the bassoon. It gives a rich, slightly buzzing quality in the lowest notes and a sweet nasal sound higher up. When used in the orchestra, the bassoon adds weight to the lowest sound.

While the saxophone is rarely used in the orchestra, it is a welcome member of most jazz ensembles. The saxophone is a single-reed woodwind instrument that produces powerful, mellow, and yet expressive sounds.

Brass players make music by blowing into their instruments through a cup-shaped mouthpiece. When playing the French horn, trumpet, or tuba, the player adjusts the valves to achieve different pitches. On the contrary, the trombone player slides the pipe to change pitches.

The trumpet produces the high, bright, and penetrating sounds that could be heard in a sports stadium. For the same reason, it was commonly used on battlefields in old days.

The trombone, Italian for large trumpet, plays the middle range of the brass group. Its sound is metallic, brilliant, powerful, and full.

While the French horn also plays in the middle range, it provides a mellower, velvety, and warmer sound than the sound of the trombone. The French horn is the first brass instrument that appeared in the orchestra in the late 17th century.

The tuba is the lowest-pitched brass. It is the largest instrument and the “double bass” in the brass family.

Everyone can make a primitive percussion instrument by striking a pot or a bucket. There are all kinds of drums in various cultures all over the world.

The most commonly used percussion instrument is the timpani, also known as kettledrums. You find them in the classical orchestra or rock’n’roll ensembles. It produces energetic thunder-like effects adding tension and drama to any music.

The snare drum produces a sharp sound, while the bass drum makes a dull thud. Additionally, the cymbals bring out a crashing metallic ringing sound. These brasses are not only used in the classical orchestra but also popular in marching bands and jazz ensembles.

Overall, the function of the percussion is to enhance the rhythmic figure in the music. It intensifies the suspense and helps to bring the music to a climax.

You may find pipe organs in local churches and many universities. The largest fully functioning pipe organ in the world is in the Cadet Chapel of the U.S. Military Academy at West Point, NY.

The piano was invented in Italy around 1700. The piano is the most popular instrument in the world. It has dominated homes and concert halls.

Nowadays, the ever-popular digital pianos have captured people’s attention as home use or stage pianos with their affordability, low maintenance, and portability. In addition, many digital pianos come with keyboard actions closely mimicking the acoustic piano and concert grand piano sounds, such as Yamaha YDP-184 and Kawai KDP-120 to name a couple.

In this post, we reviewed the main instruments in the Western symphony orchestra. Each of the instrument families has its own primary ones.

Understanding these core instruments, especially their functions and sounds, will help you to enhance your experience of listening to symphony orchestra music. It will also build up your ability to create your own music. ENJOY LISTENING!