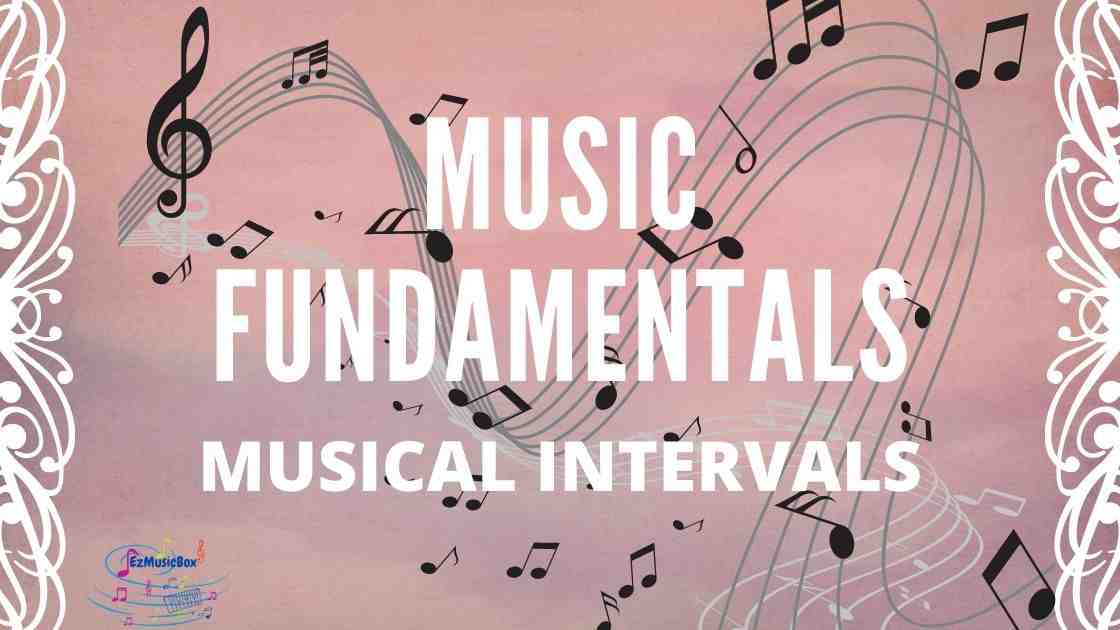 What are musical intervals? In music theory, an interval is a distance between any two musical sounds with regard to pitch. Knowing musical intervals is essential. It is the basis of all musical construction.

Moreover, intervals are examples of the simplest harmony used in music. It is also called two-part harmony.

We count the interval from the lower note to the upper including both notes. In a diatonic scale, the smallest interval is a semitone (half step).

In this post, we are reviewing various kinds of intervals and how to construct them.

A melodic interval is also a horizontal interval. We write the notes horizontally and play them one after another.

Intervals remain the same whether we use the treble clef or bass clef. For example, E to G is three intervals on both treble clef and bass clef.

An Interval name is according to the number of letters included. For example from C to E, it involves three letters: C > D > E, hence it is a third.

When two tones are the same without the pitch difference, we call it the Prime or Unison. Strictly speaking, it is not an interval.

Let’s use C Major scale to show the names of intervals. The words below the notes indicate the kind of interval. As a convention, the interval names use the ordinal numbers.

We call Second, Third, Sixth, and Seventh Major intervals because they have a corresponding Minor Interval. For instance, the Major Second from C to D has a whole step (two half-steps). If we lower the D to D♭, from C to D♭ is one half-step and we write C D♭. To avoid confusion we do not recommend you to write C C♯, even though D♭ and C♯ are enharmonic tones, because this would not include two letters to be called a Second. Hence C D♭ is the Minor Second.

The following are the corresponding minor intervals of the second, third, sixth, and seventh major intervals.

Intervals may be Inverted. This means that the tones change their relative positions. It is usually by moving one of the tones by an octave while the other remains at the same position. Inversion in an interval can happen with either the top or bottom tone.

The inversion of an interval changes the character of the interval including the name and qualities.

All interval qualities are reversed except Perfect:

Intervals in the D Major

The Major Scale furnishes us with a standard of measurement for all Intervals. We are able to apply the same rules to any major scale. Let’s use D Major for the exercise.

In this post, we explained several things about musical intervals which are a foundation for music construction.

It may seem confusing in some ways, however, if you start with C Major and get well versed in its various intervals, you will find it is easier to move to other scales. Keep practicing. Good luck!