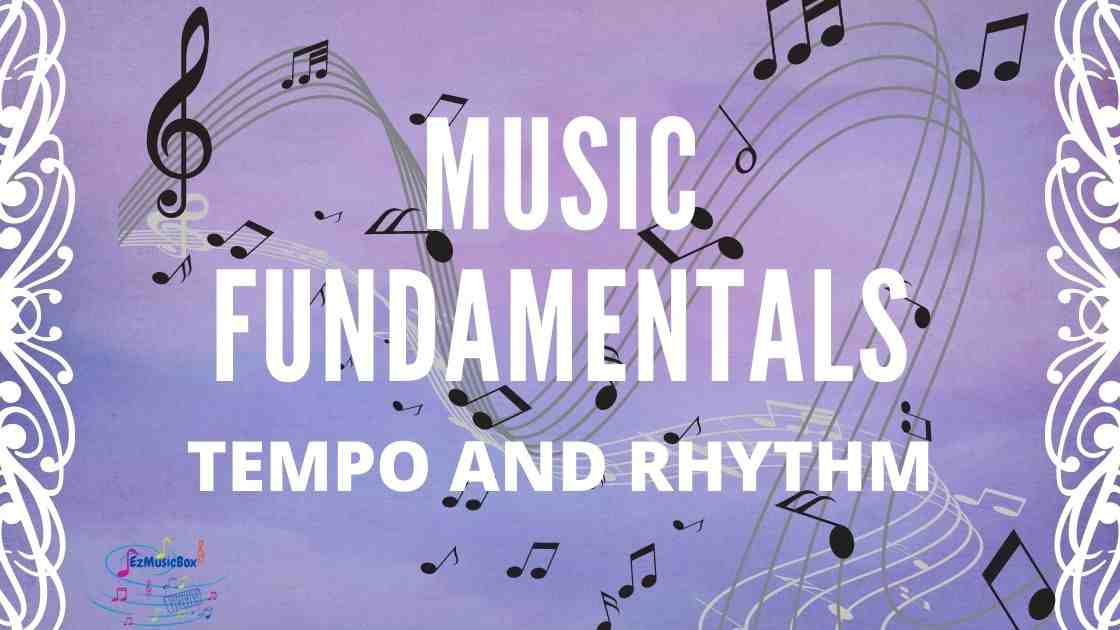 Rhythm gives the structure of a piece of music while tempo controls the speed of how you play the music.

In this post, let’s take a closer look at the tempo and rhythm.

What is the Difference Between Tempo and Rhythm?

For example, in Waltz, the rhythm is a low bass note followed by two higher notes: boom-cha-cha, boom-cha-cha……

In addition, a Waltz can be played fast or a little slower, the play speed is the tempo.

Normally you start with rhythm first because you want to learn the beat sequence. Then you’ll practice the tempo to ensure repeated patterns are consistent throughout the music piece.

The following are examples of common types of time signatures, and they are also commonly known as Simple Time Signatures.

Four beats per measure. A quarter-note receives one beat.

Three beats per measure. A quarter-note receives one beat.

Two beats per measure. A quarter-note receives one beat.

This is called common time and is the same as 4/4 time.

This means each note has half of its written value. Two beats per measure. A half-note receives one beat.

The compound time signature is dividing both the top number of beats per measure and the value of the eighth note by 3, giving the eight not a beat.

This is an example of a compound time signature.

Mostly the bottom number for the compound time signature is 8 to indicate the eighth note. Since the notes are grouped by 3, the top number usually is a multiple of 3, such as 6, 9, or 12.

Why do we use the compound time signature? It actually changes the rhythm of the music. Let’s look at some examples.

As mentioned earlier, the tempo is the speed or pace of a given piece of music. Conventionally, the tempo is indicated by a word or phrase which is very often in Italian in music scores.

Composers use tempo variations to express the “color” and emotion of their music pieces.

A metronome is a device that produces an audible click at a regular interval that can be set by the user. It helps the music to be played at the tempo indicated by the composer.

In modern days, almost all digital pianos come with a built-in metronome that serves the same function as the conventional metronome.

In many music scores, you see the specific metronome markings at the top that specifies the desired tempo for the piece.

Forty metronome beats per minute; a half note receives one beat.

In music notation, we can move the natural strong beat from its normal place to a weak beat using special accents (>). By doing this, we have syncopation. As a result, syncopation changes the natural rhythm of the time signature.

The tie is a line curved between two notes of the same pitch (see example above). The first note is played and held for the time duration of both. You do not play the second note, just hold.

In this post, we explained the difference between tempo and rhythm. In simple terms, rhythm is the structure and tempo is the speed. The time signature tells you the number of beats or counts in a measure, as well as the type of notes that receives one beat.

The composers can use the accent marks or ties to change the natural rhythm from the time signature that creates syncopation, ultimately achieving rhythm variations.

Hope this helped you to understand the tempo and rhythm, and time signatures. If you have any questions, please do not hesitate to contact me.