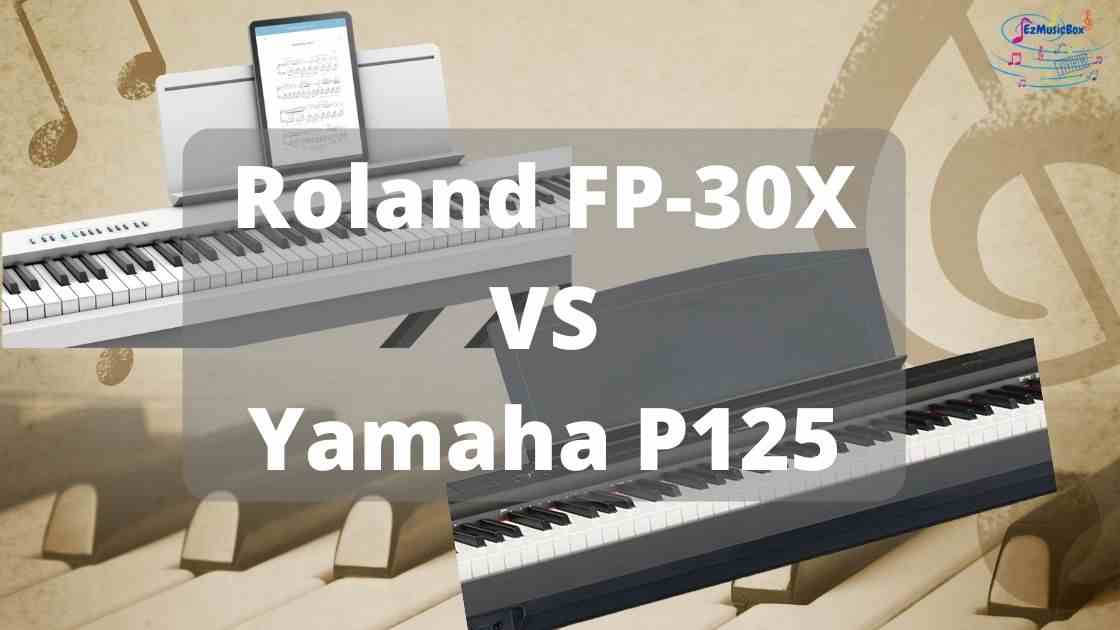 Hi Everyone, this is Anne Watson again, for another digital piano comparison review Roland FP-30X vs Yamaha P125. The Roland FP-30X, one of the latest releases of Roland digital pianos, is the successor of the popular FP-30.

Both the Yamaha P125 and Roland FP-30X are mid-range portable pianos marketed for under a thousand US dollars. Although both these digital pianos have many similar features, some key differences may influence your purchase decision.

Hence, in this post, our discussion is centered on the differences. For detailed information on these models, check out our in-depth reviews of Roland FP-30X and Yamaha P125.

Both the Roland FP30X and the Yamaha P125 are light-weighted portable digital pianos with many similar features, such as

Overall Yamaha P125 has easier controls on selecting voices, adjusting the sound volume, and accessing the accompaniment rhythms on the piano itself, whereas, on the FP-30X, some of these settings are only accessible via Roland’s Every Day app.

Additionally, the FP30X is over 6 six pounds heavier than the P125. The trade-off is the more powerful speakers in FP30X.

Both pianos come with a plastic foot switch functioning as a piano damper pedal. In addition, both brands offer optional stands that match your piano with an optional triple paddle unit. This allows you to easily convert your slab into a console-style upright piano for home use without losing its portability.

It goes without saying that Roland FP-30X vs Yamaha P125 comes with different looks and onboard control buttons. But what are the major differences that may swing your purchase decision? Let’s take a closer look at the top three considerations: Sound, Key Action, and Connectivity.

The P125 is equipped with Yamaha’s CF 3 concert grand piano sound. Even though the CF3 sound is a notch down from the CFX, it is still a world-class sound from a piano.

Roland presents the SuperNATURAL piano sound on the FP-30X. It samples every single one of a piano’s 88 keys, at full length, with completely natural decay. Like any great technology, SuperNATURAL simply happens beneath the hood, but it provides an extremely realistic piano playing experience.

In short, it is very subjective to judge which sound engine is better. However, the FP30X has an advantage in the sheer number of onboard voices, 56 plus over 120 tones accessible via a Roland mobile app versus 24 voices on the Yamaha P125.

Interestingly the speakers on these two models have their own strengths. The FP-30X comes with a really good bass presentation while the P125 has really nice treble clarity. Roland FP-30X’s more powerful speakers are still facing downwards that is where the Yamaha P125’s 2-way 4 speaker system has an edge, especially in the high pitch range.

Polyphony on digital pianos is the maximum number of notes that an instrument can sound simultaneously. The FP-30X presents 256 notes while P125 has 192.

In general, the 192 polyphony is enough to play some very complex music pieces with sustaining and layering without losing any notes.

The Roland FP-30X and the Yamaha P125 keyboards have 88 fully weighted and graded keys. This means the keys on the bass section are heavier than the ones on the treble section, just like an acoustic piano.

The key action on the FP-30X has Roland’s PHA-4 which is its signature 3-sensor key detection system. It is superior to Yamaha’s GHS on P125 which is a couple of decades old with a dual sensor system.

Additionally, the FP30X has textured surface keys that simulated an ivory feel versus the white glossy keys on the P125.

The biggest advantage of Roland FP-30X key action over Yamaha P125 is the escapement mechanism. This makes the FP-30X more like a grand piano.

Most people choose digital pianos are targeting for their technological features. We are now living in a world with ever-increasing wireless connectivity and wireless devices.

Roland has equipped wireless connectivity on the FP-30X. It supports both Bluetooth Audio and MIDI interfaces while the P125 still requires a USB cable to connect to Yamaha’s Smart Pianist app.

Using the Bluetooth Audio capability on the FP-30X, you can wirelessly stream your playlist from your mobile phone and sound out on your piano speakers, and use the Roland’s Every Day app without a cable.

In terms of Roland FP-30X vs Yamaha P125, overall, there is not a bad choice between the two. In order to help you with your purchase decision, we merely indicate the differences. Therefore, you may decide which one is better to fit your needs and personal objectives of using the piano.

In Summary, here are the 3 considerable differences:

While choosing a piano is really a subjective matter, we would recommend the Roland FP-30X. Since it comes with more advanced technology, it may be worth keeping for a longer period. Moreover, it features a powerful speaker system for more expressive sound effects.

On the other hand, if you would like to scrutinize the price, on Amazon, the P125 seems to be at a lower price than the FP-30X.