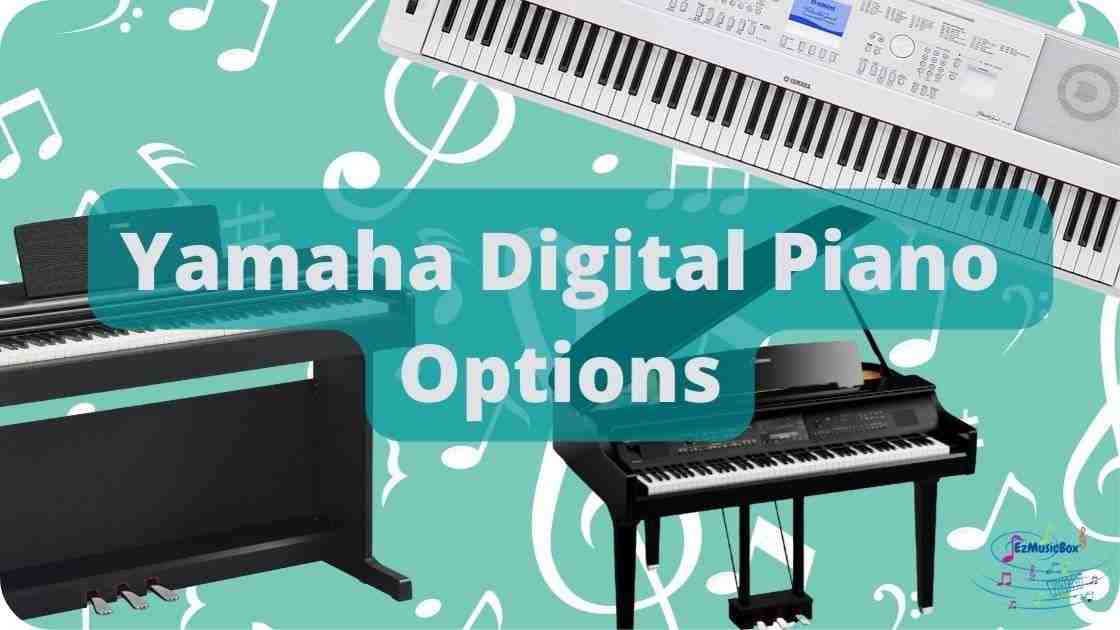 Yamaha digital pianos are very popular around the world. However, if you are on the market to purchase a Yamaha digital piano, you’ll find many choices, maybe a bit overwhelming. Within the digital piano category, Yamaha has at least six series. When you include the keyboards and synths, there are even more options.

Furthermore, Yamaha periodically offers new releases to replace previous models. For example, in late 2020 Yamaha released several new models of the Clavinova CLP, and in early 2022 newer models of the Arius series came to the market.

What is in For You?

While Yamaha’s extensive product variety will meet any buyer’s desired features, you may end up being confused just thinking about which one is best for your purpose.

But, don’t worry! We are here to help. In this post, we are covering the current Yamaha digital piano offers in a rudimentary way that helps you to make an informed buying decision.

For the purpose of this article, we are discussing digital pianos with an 88-key full-size weighted keyboard. If you are not clear about weighted keys and the difference between a digital piano vs a keyboard, refer to related articles:

When it comes to choosing a digital piano, the first question to ask is whether you need your digital piano to be portable, or if it stays in one location all the time.

The “P” in the Yamaha P-Series is for Portability. These compact and lightweight digital pianos are perfect for carrying around and absolutely gig-friendly. They are also the most popular Yamaha digital pianos.

The P45 is the entry-level piano in the P-series. In terms of Yamaha P45 vs P71, they are identical in function and the only difference may be in the price. Yamaha P71 is an exclusive model sold on Amazon.com.

The P45/P71 is the cheapest Yamaha digital piano with a Graded Hammer Standard (GHS) keyboard and a decent sound engine of AWM (Advanced Wave Memory) sampling technology. It also packs:

Overall, the P45 or P71 is more than sufficient for most beginner or early intermediate players for several years before needing an upgrade.

The Yamaha P-125 is an upgrade from P45 both in key action and sound engine. Especially it features a Pure Yamaha CF grand piano sound engine with damper resonance.

In addition, the P125 comes with

Check out our in-depth review on the Yamaha P125.

The flagship of the P-Series is the P-515. It is a deviation from other models in the P-Series. In essence, it is a portable version of now discontinued Yamaha’s Clavinova CLP-645 and its successor is the recently released CLP-745.

The Yamaha P-515 is equipped with many standard features in the P-125 such as headphones ports, metronome, etc. Additionally, it has

Therefore, I would recommend you purchase the matching wooden stand to transform it into a nice home digital piano. Even so, it still can be a portable digital piano to fulfill your gigs as needed.

The DGX series has been around since 2002 and it has come a long way to the current complete package for musicians to play at home or perform on the stage.

The DGX-660 was released in 2016. While it is certainly not a terrible digital piano, we feel there is some room for improvement. With the latest DGX-670, it is a nice upgrade over the DGX-660.

In terms of the arranger feature, the DGX-660 offers hundreds of rich accompaniment rhythms across diverse genres to play with. With the DGX660 Smart Chord feature, you can trigger the accompaniment chords easily by pushing a button.

The DGX-660 features the Graded Hammer Standard (GHS) key action, and it’s the same keyboard action you’ll find in the Yamaha P-125 digital piano. The DGX-660 also has the same sound engine as the P125, the Pure CF sampling.

Other notable functions of the DGX-660:

The DGX-670 has a different look with a rounded corner design. It also has a full-color high-resolution display screen that is a wonderful upgrade from the DGS-660. Yamaha made the control on DGX-670 more intuitive by eliminating the need to hit the piano room or style button first before selecting your numbers. You can select voices directly.

Another cool thing is that the DGX-670 has Bluetooth Audio, hence you can now wirelessly connect to your mobile device and playoff sounds on your phone through the onboard speaker system.

Just like its predecessor, the DGX-670 presents a lot of arranger functions with songs, styles, recording abilities, and accompaniments. However, the newer model provides the ability to seamlessly switch voices in mid-performance.

The default grand piano sound of DGX-670 is Yamaha CFX sampling, which is a major upgrade from the Pure CF sound in the previous model. However, other voices featured in DGX-670 also set it apart, for instance, amazing organ sounds, realistic brass and woodwind sounds, and super cool synth sounds.

One thing to note is that the music stand for DGX-760 is optional now. You’ll have to purchase it separately, versus the old DGX-660 that comes with the matching stand. Hence, when you compare the prices, you’ll need to take this into account.

Yamaha Arius and Clavinova series digital pianos are console-style models. These pianos look similar to the upright acoustic pianos, except the models end with “GP” to indicate the Grand Piano style.

The console-style models come with furniture-style cabinets and three pedals. One of the advantages of having a console-style digital piano is that you do not need to be concerned with optional parts like the stand or pedals. You have everything right out of the box and start playing your instrument. Additionally, it is often a beautiful piece of furniture to complete your living room.

Compared with portable models, the console-style digital pianos are bigger and heavier. More materials and larger speakers are built into them. Usually, they cost more than the equivalent portable versions.

There are two main categories in the Yamaha Arius lineup: the YDP series and the YDP-S (slim) series. The YDP-S55, YDP-S54, YDP-S35, and YDP-S34 are more compact in size and with folding key covers while YDP models come with sliding key covers.

The brand new models in the Yamaha Arius category have gone up in price due to new production and shipping cost increases. Overall, the new models have not much changed over the predecessor models. They have the same cabinet and control design. The key action and built-in speaker system are the same. There is some enhancement in the sound engines in the new models. Specifically, the VRM Lite (Virtual Resonance Modeling Lite) technology reproduces the sympathetic resonance.

The YDP-184 is the most luxurious model in the Yamaha Arius category. Many features set it apart from the rest of the models:

Check out our full review of YDP-184.

Depending on the model you choose, the Arius digital pianos come with Yamaha’s older GHS (Graded Hammer Standard) or the newer GH3 (Graded Hammar 3) key action. Their keys are made of plastic and only black keys have a matte texture.

From these models, you get 10 onboard voices. You have the metronome, still, there is no rhythm available for you to play along with.

None of the models has the output connectors for the external amplification system. However, you have two standard stereo jacks for headphones that you may use for external speakers.

The Yamaha Clavinova line is considered some of the best digital pianos with three series, the CLP, the CSP, and the CVP.

The Yamaha Clavinova digital pianos feature the acclaimed Yamaha CFX and Bösendorfer Imperial sound samples. In addition, the CLP pianos are equipped with the new Yamaha Grand Touch™ keyboard with wooden keys and synthetic ebony and ivory key tops. The key actions that come with an escapement are similar to acoustic grand pianos.

The CLP models are wonderful digital pianos for those who are more concerned about the piano sound and the key touch without other bells and whistles.

In these digital pianos, you also get key-off samples, 256-note polyphony, a 3-way speaker system, damper, and string resonances.

The Bluetooth Audio and MIDI provide the wireless capability to connect your piano to your smart devices to use with Yamaha’s Smart Pianist app or play songs from your devices through the onboard speaker system.

Furthermore, there is a metronome plus 20 basic rhythms to play along with, as well as a built-in audio recorder.

If you want a piano with fine sound and an excellent key action without very much else, the Clavinova CLP will be a nice choice with no need to pay more for other Clavinova series.

The CVP models are remarkably versatile instruments. They carry many features of an arranger coupled with Clavinova’s signature sounds of Yamaha CFX concert grand and Bösendorfer Imperial and the Yamaha Grand Touch™ keyboard as well.

These digital pianos have hundreds of accompaniment rhythms, a beautiful color LCD touch screen, and tons of buttons on the panel for adjusting every imaginable combination that you can think of, an opportunity to create new sound styles.

A multi-track recorder will really inspire your creativity. Additionally, you can plug in a microphone to sing along with while a vocal harmonizer provides backup vocals.

All these features are packed into the console of a CVP digital piano. The CVP series is the most luxurious of the Clavinova, hence they come with a steep price tag. While it is still much cheaper than a Yamaha CFX concert grand, these CVP pianos depreciate much faster than an authenticate Yamaha CFX.

The CSP series is the value version of the CVP series. If you couple a CSP piano with the Smart Pianist app on a powerful smart device, you pretty much have a CVP piano for half of the price.

Yamaha offers some very good portable pianos for various budget levels. Even with the low-budget models like P45/P71, they are enough for beginners to get used to the weighted key actions. The versatile DGS models are excellent for home or stage use.

Clavinova digital pianos are the most luxurious and they are packed with a lot of expensive sounds and functions.

If you just start learning piano, an Arius model suffice. Should you need to perform in various small gatherings, a portable model will be perfect. To get a concert grand piano experience at home without the cost, one of the Clavinova models will fit the bill.