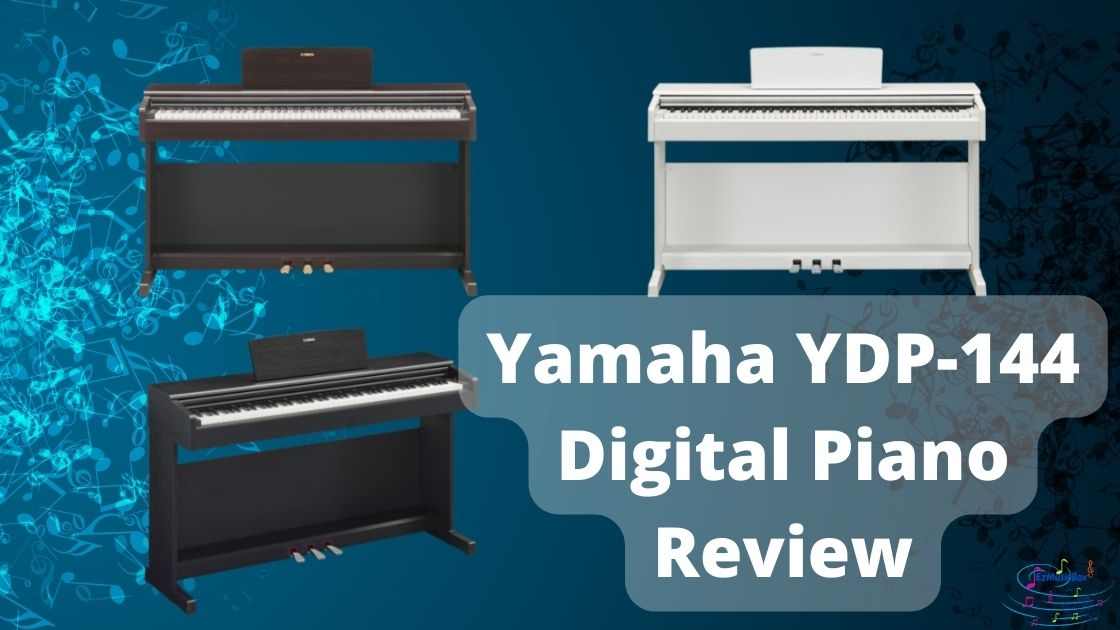 Yamaha YDP-144 is an entry-level product in the YDP line. The YDP-144 is a very popular model for home and lesson studio use.

Yamaha YDP line is also known as Arius series home digital pianos priced between $1000 and $2500. The series comprises various models that have been upgraded throughout many years.

The brand new model YDP-145 has gone up in price due to new production and shipping cost increases. Overall, the new YDP-145 has not much changed over the predecessor YDP-144. They have the same cabinet and control design. The key action and built-in speaker system are the same.

Moreover, both are compatible with Yamaha’s free app Smart Pianist.

On the other hand, Yamaha YDP-145 features some enhancements in its sound engine:

The YDP 144 has a modern stylish design available in three color finishes – dark rosewood, black walnut, and satin white – that will perfectly uplift any room. The compact design of the Yamaha YDP144 is ideal for a small apartment or lesson studio.

The YDP-144 does not have an LCD visual control penal. Normally, Yamaha reserves this feature for their higher-priced models.

The function buttons are on the left side of the keyboard while the power switch and volume knob are on the right side.

In addition, the YDP-144 control design leverages the piano keys of the second octave from the left combined with functional buttons. For example, you can change the voice to Pipe Organ easily by pressing the Piano/Voice button with the G key in the second octave. You can find the key assignments in the Owner’s Manual.

Overall, the Yamaha Arius YDP-144 presents a clean and minimalistic look and it also comes with a sliding cover with an integrated music rest that helps keep dust away from the keys.

The lack of an LCD control panel is well compensated by Yamaha’s free app Smart Pianist. It is very easy to manipulate the settings with a visual presentation.

Just like an acoustic grand piano, the YDP-144 has three pedals for sustain (right), soft (left), and sostenuto in the middle. The sustain pedal supports a half-pedal function which usually is found in pricer digital pianos.

When you press the sustain pedal, the notes ring on even if you take your hands off. However, if you don’t press it down fully, you get the half-sustain effect. It is a brilliant design to truly replicate the pedals of acoustic grand pianos.

The sound engine for the YDP-144 is CFX sampling. This means this digital piano has the sound of the iconic quarter-million-dollar concert grand piano CFX. It is a very high-quality sound engine that provides a clear tone.

The specific quality of the sound is its very stable tonal profile. In other words, you are not getting a huge difference from playing in lower dynamics ranges to the top end. Therefore, it has a consistent tone just like its acoustic version, the CFX grand.

The Yamaha YDP-144 has 192-note polyphony. Polyphony on digital pianos is the maximum number of notes that a keyboard can sound simultaneously.

192-note polyphony is plenty even if you layer one of two tracks or playback from recording.

The instrument has a pair of 8W speakers built-in. It has plenty of power for personal or teaching studio use in a relatively small room, but it is on the lower end compared with other models in the price range.

When you get into higher-end models in the Arius series like YDP164 and YDP184, you’ll have more substantial power in speakers. Even in a comparable model like Kawai KDP120, it has a total of 40 Watt output.

While the output wattage does not linearly correlate to the decibels, the higher wattage output certainly provides a richer sound that makes material differences.

Besides the CFX Grand voice, the YDP-144 has nine more voices:

Although the YDP-144 does not come with a huge selection of voices, the quality of the voices is very good. Additionally, the YDP-144 comes with 50 preset songs for your listening pleasure and play-along with the included music book.

The most essential part of a piano is the keyboard. The Yamaha YDP144 features a full 88-note keyboard with Yamaha’s Graded Hammer Standard (GHS) key action. It means the keys at the bottom are heavier than those at the top. That’s what you’ll find on a traditional acoustic grand piano.

Overall, the keys feel nice and they offer the resistance that you’ll find in an acoustic piano. The action system has a double sensor instead of the latest and greatest triple sensor system. However, it is still a very decent keyboard to practice your skills.

The black keys have a matte finish that provides a good grip. Unfortunately, the white keys with a glossy finish could be a bit slippery for fast and forceful play.

Additionally, the keyboard offers 4 different settings for touch sensitivity. You can choose from soft to hard, and anything in between.

Other Features of Yamaha YDP-144

Yamaha YDP-144 offers many digital features that further enhance your play and listening experience. All these features can be controlled via the Smart Pianist app on your smart devices or by using the onboard buttons and keys.

The two-track sound recording function on the YDP-144 is useful for practicing or playing along with the recorded songs. It allows you to record as a MIDI track or as an audio track (via the Smart Pianist app).

This could be very handy for someone who wants to get the MIDI files or just wants to have an MP3 file to share with friends.

The onboard metronome provides convenience for practice. It helps regulate the tempo and rhythms. Nowadays, this is pretty much a standard function of all digital pianos.

There are some convenient connectors available on the Yamaha Arius YDP-144. These ports are under the keyboard and on the front side for easy access.

The two standard quarter-inch headphone jacks enable you to have convenient practice sessions at night without disturbing those around you.

However, there is no separate audio out jack. Thus, if you need to connect to externally powered speakers, you can leverage one of the headphone jacks. When you are doing this, the onboard speakers are off automatically.

The USB-to-Host (type B) is a simple plug-and-play port. It allows connection to any computer or mobile device you wish. There is no driver and no installation required. The USB port offers a convenient way to connect to Yamaha’s Smart Pianist App, which allows you to manage the piano setting or select songs on your mobile devices with visual presentation.

There is no USB-to-Device (Type A) connector on the YDP-144.

Our Conclusion On Yamaha YDP-144

The Yamaha YDP-144 is one of the most popular home digital pianos in the world. It is right up with instruments like Kawai KDP120 or Roland RP102.

Overall the YDP-144 or even YDP-145 is excellent value for your money. It features brilliant key action, fantastic sound, and an appealing design. As we mentioned at the beginning, there is not much difference in terms of Yamaha YDP-144 vs YDP-145.

We truly think either one is an outstanding and enjoyable instrument for any budding pianist.