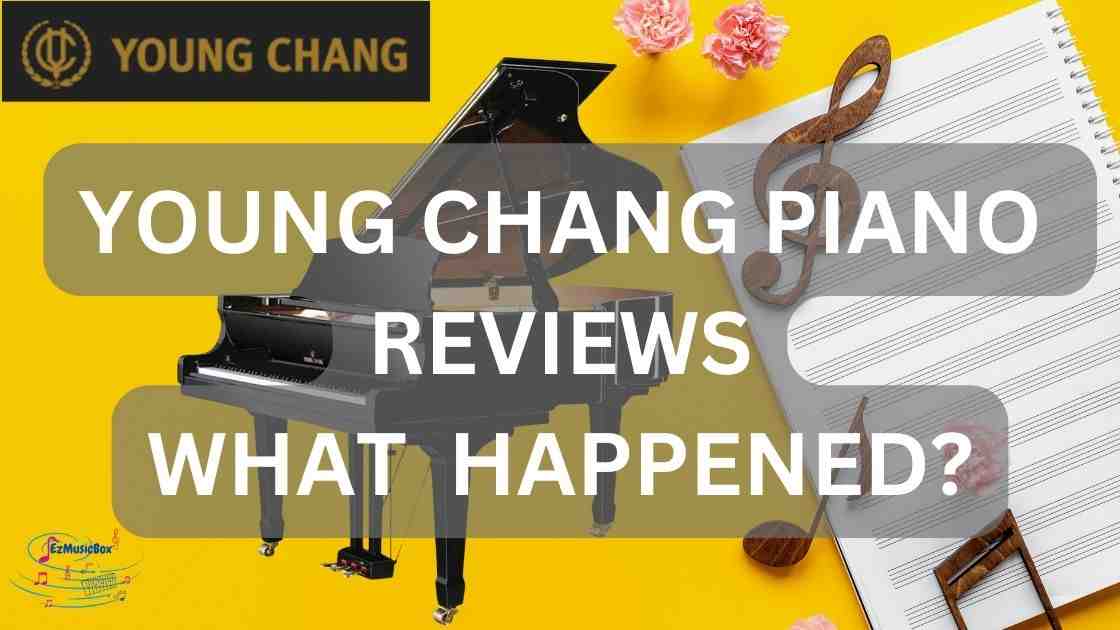 In this article, we are putting Young Chang Pianos in the spotlight. The Young Chang Piano Reviews do not focus on any specific piano but talk about what happened to Young Chang, its history, and the current state of the brand.

Young Chang was founded by three brothers in 1956 as a distributor of Yamaha pianos for Korea and other parts of Asia, therefore, it has a rich history with Yamaha.

The three brothers started assembling the pianos for Yamaha, then they got into key cutting and action components. Eventually, they established the first Young Chang factory in Seoul in 1964. It was the first Korean piano brand.

Throughout the years, Young Chang has changed their manufacturing and design many times. The company really got momentum in the 70s and entered the US piano market. Those Young Chang pianos were extremely affordable, and they looked great, played well, and sounded nice. Hence they became very popular.

There is a timeline of Young Chang’s history on its official website.

The late 90s was the time that Young Chang really grabbed a lot of attention with its Pramberger line of pianos.

In 1995, Yough Chang brought on Joseph Pramberger, a former vice president from Steinway & Sons, head of manufacturing, and an experienced piano designer.

Pramberger brought many innovations to Young Chang’s piano design, including the platinum touch action and the patented asymmetrical tapered soundboard. Additionally, Pramberger made some scale changes such as repositioning and redesigning the bridges, re-scaled strings, re-positioned ribs, etc. Hence Young Chang has its own tone quality and harmonics.

One of the top Pramberger grand piano models was the PG-185 which was released in 1999.

The Pramburger pianos started showing up in music schools, in smaller universities and colleges, and even in some European schools. Those pianos were desirable because of their good action, nice sound, and affordable price.

In the late 90s, Young Chang invested in a huge facility in Tianjin, China. They were one of the first companies to build a piano factory in China. Most of the Young Chang Pianos that are sold in the US are made in China.

Other piano manufacturers perfected the idea that Young Chang pioneered in the Chinese manufacturing market. On the other hand, Young Chang lost momentum and its competitive edge. Eventually, in 2004, Young Chang had to deal with bankruptcy. However, they worked their way out of it.

State of the Brand Today

In 2006, Hyundai Development Company (HDC) purchased Young Chang which enabled Young Chang to continue to make pianos. Since 2009, Young Chang collaborated with the well-known American piano designer Delwin D. Fandrich as a technical consultant. The new Fandrich design has helped Young Chang to evolve into the premium Piano maker that it is today.

Presently, Young Chang’s Y-series includes both upright and grand pianos and they are built in China. The top-of-the-line Y-185 professional grand piano is a six feet concert grand and features a solid spruce soundboard that provides excellent tonal quality.

Some models have very nice key actions, for instance, the CUP 410 is equipped with an 88-key full keyboard with graded hammer action and a 3-point velocity sensor.

In this article on Young Chang Piano Reviews, we shared the history of Young Chang’s roller-coaster journey. While the piano brand is still struggling to maintain its relevancy, the Fandrich design has given Young Chang a healthy recovery. Young Chang still makes good pianos and holds 50% of the South Korean piano market. The company is among the largest and most automated of the world’s piano manufacturers.

I hope this post helps you to know more about Young Chang and Kurzweil. I will do some detailed Kurzweil digital piano reviews soon. Meanwhile, please check out our Best Digita Piano Reviews.