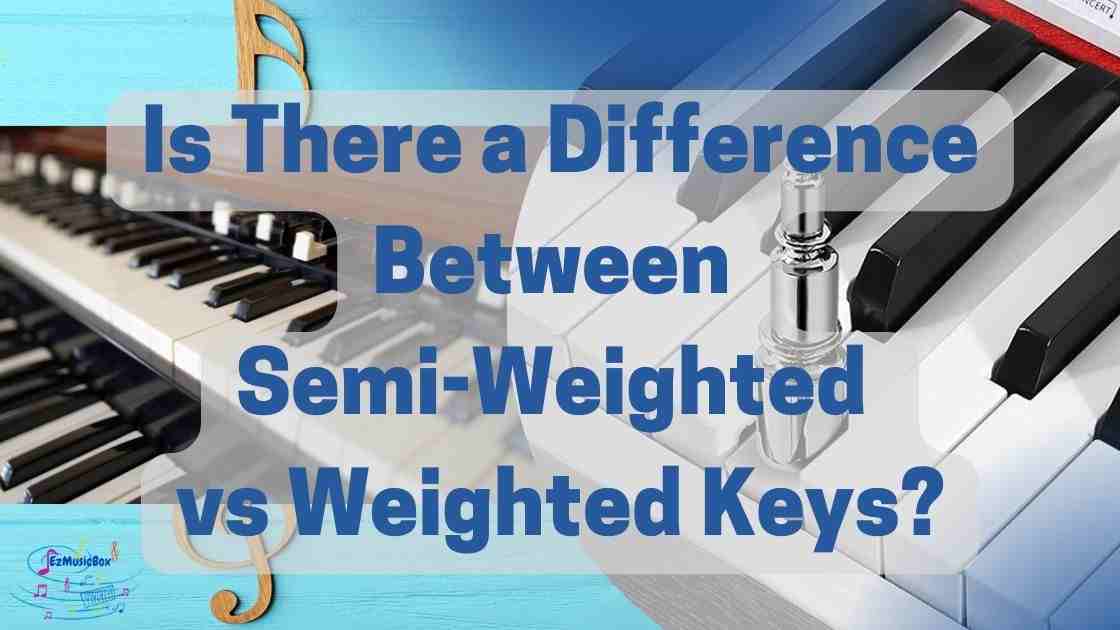 Before we delve into the difference between the semi-weighted vs weighted keys of any digital piano, I would like to share two vital moments in my earlier piano journey.

I grew up with a Bechstein baby grand performance piano at home. Naturally, I was used to the weighted hammer action piano keyboard. Because it was a performance piano, the keys were relatively light.

In this article, let’s take a closer look at the difference between semi-weighted vs weighted keys.

What are Weighted Keys on a Digital Piano?

When the acoustic pianos are from the same brand and maker, they may still have subtle differences in each piano. On the other hand, digital pianos are mass-produced electrical instruments. The technology used on the weighted key action of a specific digital piano model is the same. Of course, each digital piano maker applies different techniques to their keyboards.

Usually, the weighted keys mean that every key on the keyboard has the same weight, regardless of its position on the keyboard. Hence, it is not fully simulating the feel of an acoustic piano.

With technological advancement, many digital piano manufacturers started shifting from simply weighted keys to the graded hammer action. The weighted keys are graded from low to high. The weight of the keys in the bass section is heavier feel in your left hand, and as you move up the keyboard to the right, the feel gets lighter. The digital piano makers also create mechanisms under the keys to mimic the hammer behaviors found in an acoustic piano.

Check out the 10 Best Digital Pianos we reviewed and they all have outstanding key actions. You will find the best one that fits your style and preference.

Difference Between Semi-Weighted vs Weighted Keys

The semi-weighted means spring-loaded keys (also known as synth action) with light weights attached to them. Due to the combination of the synth action and weighted action, it sounds like a nice in-between option.

In reality, there are not a lot of semi-weighted keyboards or digital pianos. It’s kind of a separate genre in itself. The semi-weighted keys were first seen in electric organs like a Hammond Organ. Nowadays, it is mostly on some high-end Nord organ simulators. And you may also find them on some old synthesizers.

On the other hand, if you come across a keyboard that features semi-weighted keys, you need to make sure it is touch-sensitive at a minimum.

While the keyboards with unweighted keys are much more affordable, I would not recommend them to any beginners who want to learn to play piano. Still, there are few very affordable digital piano models available on the market, such as Donner DDP-20 which is a decent beginner piano with graded weighted keys.