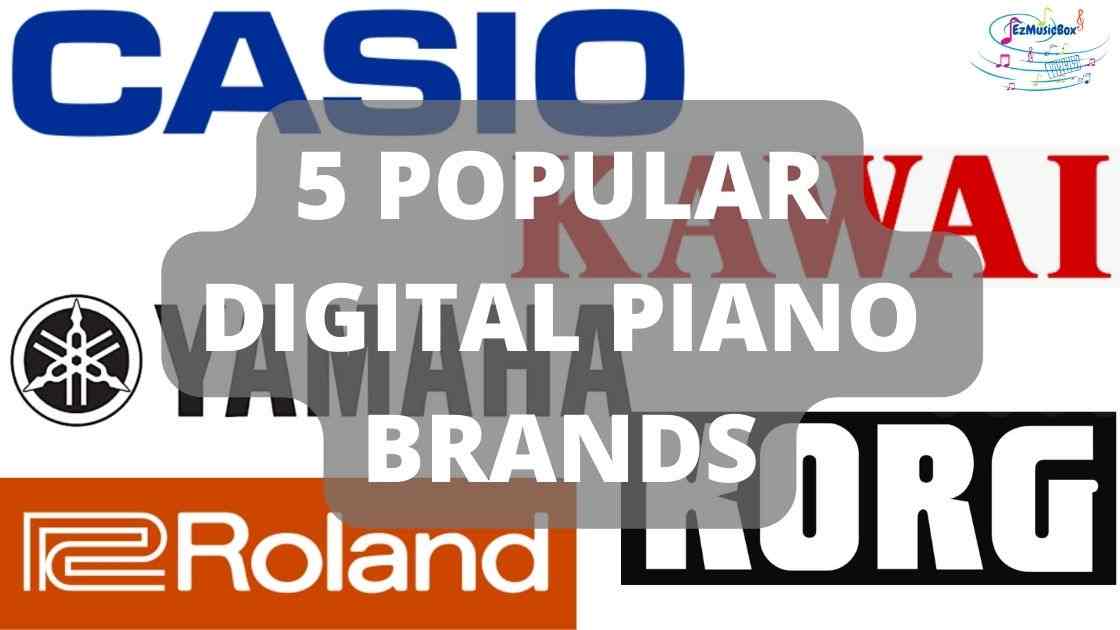 Nowadays more and more people opt for digital pianos. However, there are so many digital piano brands on the market. How can people find the best one for themselves or as gifts? But don’t worry, that’s the reason I’ve written this post.

The music world is evolving rapidly with technology. Additionally, the piano is one of the most popular musical instruments in the world. Moreover, technological advancement has made digital pianos cheaper with better sound and more functionalities.

For those on the market for a piano, the five digital piano brands covered in this post are worth your attention.

To make things easier, we are going to break down the core characteristics of a digital piano into simple terms:

When comparing the brands, we are considering three aspects including brand history, notable models, and brand-specific core characteristics

In this post, the following digital piano brands (not in a particular order) are the focus.

What is a Digital Piano?

A digital piano is an electronic instrument. At its most basic, it consists of an 88-key weighted action keyboard, a tiny onboard computer, and a pair of speakers.

Essentially, digital pianos are designed to mimic the sound and key feel of the acoustic piano as closely as possible. A digital piano produces sound electronically. In contrast, a traditional piano makes sound mechanically.

Now let’s delve into the specifics of these five digital piano brands.

Casio Brand is the most familiar electronics brand. It is a Japanese international electronics manufacturing company. Its products range from calculators to watches, and electronic musical instruments.

The company was established in 1946. Casio started making electric keyboards in the 80s of the twentieth century. Ever since Casio’s lightweight and affordable keyboards got into millions of households worldwide.

The damper pedal replicates the damper resonance as the string vibration in an acoustic grand. Hence it creates a dramatic musical expression in a digital piano and further enhances the grand piano experience.

Most the Casio’s digital pianos are equipped with Tri-Sensor Scaled Hammer Action keyboards. They use the hammer action just like grand pianos without springs.

The Tri-Sensor System enables the keys to respond solidly and naturally. This brings the keyboard, even more, closer to a traditional grand piano. The Tri-Sensor additionally enhances the ability to play the same note in quick succession.

The most notable and popular Casio digital pianos are the Privia series.

These contemporary digital pianos come in home-use uprights or sleek portable designs. For instance, the Privia PX-S3000 is a very versatile portable digital piano. They are featured impressive and rich sound and many have power speaker output as well. Also, they have the feel of acoustic piano keyboards.

The Casio Privia series are at an affordable price point. Thus, it is the best value choice for enthusiastic learners, professional musicians, and occasional players.

Yamaha is one of the most popular digital piano brands, and this Japanese international company provides a very broad range of products and services.

Torakusu Yamaha founded the company in 1887. Although it started with organs and pianos, Yamaha also produces motorcycles, sporting goods, semiconductors, and an array of musical instruments besides pianos. Click here for a chronological view of Yamaha products.

Yamaha piano-making has over a century of history. The first upright Yamaha piano was made in 1900, followed by a grand piano in 1902. Then, in the 1950s Yamaha began researching electronic musical instruments, and the first electronic keyboard was introduced in 1959.

During the 1970s and 1980s, Yamaha produced several versions of Stage Pianos, Syntheseisers, and portable keyboards. The first digital piano was Yamaha Clavinova YP-30 and introduced in 1983. Since then, the company continue to evolve and innovate. Until now, Yamaha offers many outstanding digital pianos.

When it comes to the Yamaha piano, its flagship concert grand CF Series is featured in many of the world’s most prestigious concert halls and music conservatories.

Consequently, Yamaha equipped the distinguished CF concert grand sound in many models of its digital pianos.

Thus, with the CF Sound samplings along with the powerful onboard speakers, Yamaha offers its digital piano players an expressive acoustic piano experience.

Yamaha’s term for its 88-key graded weighted keyboard is the Graded Hammer Standard (GHS). This action is mostly available on Yamaha’s portable P-Series pianos. Thus, it is excellent for beginners and not difficult to transition to acoustic pianos.

The Graded Hammer 3 (GH3) action is found on more expensive Yamaha digital pianos, for instance, the ARIUS Series. Notably, the GH3 has a three-sensor configuration. As a result, the keys give a quick response and realistic feel when used.

Yamaha P-Series digital piano is the world’s most popular lineup because they come with the world-renowned CF concert grand sound and sophisticated keyboard action.

Several models are under a thousand dollars, hence it makes them very competitive. One example is the mid-range portable piano Yamaha P125.

The ARIUS digital pianos are also known as YDP-Series. Yamaha’s state-of-the-art recording technology replicates the iconic CFX sound in them.

Roland is a Japanese company that exclusively manufactures electronic musical instruments. Due to its exclusivity, Roland has been an impactful player in the digital instrument realm.

The company was created in 1972. In the half-century of history, Roland is the most innovative brand.

In addition, Roland strives to design pianos that look as good as they sound.

The SuperNATURAL sound engine is Roland’s signature found in its digital pianos. In order to capture the more realistic sound of a piano, a violin, etc., the SuperNATURAL technology creates models of the natural sound characteristics and expressiveness of each instrument.

This allows the SuperNATURAL sound engine to react to performance dynamics and nuances from the key actions, just as it would in the original instrument. Hence the sound provides a more realistic play experience.

Further, the use of a piano pedal or footswitch will invoke the damper resonance.

Roland furnishes its digital pianos with Progressive Hammer Action (PHA) system. In other words, the PHA keyboard has fully graded weighted keys that closely mimic the feel of an acoustic piano.

Many mid-range Roland digital pianos come with the PHA-4 system, for instance, the RP102. In particular, the PHA-4 provides an artificial escapement and ivory feel that enhances finger controls.

Roland RD-Series digital pianos are widely used on live stages for decades. These digital pianos offer not only the SuperNATURAL acoustic sound but also Synth type of sound engines as well. Besides, the easy on-the-fly controls, and the external MIDI device connections, make the RD-Series great for stage and recording.

Kawai is a musical instrument manufacturing company that was founded in 1927. Nowadays, it is a multinational musical instrument company. Koichi Kawai was once Torakusu Yamaha’s (Yamaha’s founder) apprentice. This might give us a hint why Kawai is the only piano builder that can indeed rival Yamaha’s domination.

In nearly a hundred-year history, Kawai pianos have evolved steadily. Its Shigeru Kawai grand piano series (SK-Series) earned the reputation as one of the best grand pianos in the world.

In the 1960s, Kawai started producing electronic organs. However, Kawai digital pianos were launched in 1986. Since then Kawai designed and manufactured several award-winning digital piano series.

In order to produce the most realistic replication of Kaway’s signature SK-EX sound, Kawai has developed the acclaimed sound technology Hamonic Imaging (HI) which is a blend of technology and techniques. Thus, Kawai puts forward tremendous realism and expressive sound in its digital pianos.

Kawai continues its effort to provide exceptional digital piano actions. The new Responsive Hammer Compact (RHC) keyboard action has been developed to replicate the distinctive touch of an acoustic grand piano. Furthermore, the RHC II enhances the keys with some sort of cushion material that makes the play even more pleasant.

The Kawai KDP series and ES series are furnished with RHC II and RHC action respectively.

Kawai’s CN-series pianos are a step up from the KDP series. Not only do the pianos come with the SK-EX sound engine, but the sound system of CN-series pianos also features key components from audio equipment specialist Onkyo. As a result, the player will get an incredibly tight clear full range colorful sound.

Kawais ES series is also one of the most sought-after portable digital pianos. They are versatile, have the great sound of the EX concert grand sampling set, and exceptional touch.

Last but not least, Korg is another Japanese company exclusively making electronic musical instruments. It was founded in 1962 and the original company name was Keio Electronic which was later renamed Korg.

In the past fifty years, Korg’s synthesizers have progressed along with technological advancement. They are used by many professional musicians and artists.

Korg is best known for its Italian, Geman, and Japanese grand piano sound samples. Thus, many models contain a combination of these grand piano voices to suit a wide range of musical genres.

Many of Korg’s digital pianos are equipped with its precisely engineered Real Weighted Hammer (RH3) key action and it is the exact same action found on Korg’s flagship Kronos Music Workstation and its professional Grandstage piano.

The RH3 action 88-key full-size keyboard is progressively weighted to replicate an acoustic piano and it is easy to express both pianissimo and fortissimo. The three velocity curves further ensure the best fit for your playing technique.

Furthermore, the RH3 key noise is well dampened and the felt liner at the key pivots helps to keep key noise to a minimum.

The D1 Air and C1 Air models have superb sound from Korg’s Stereo PCM sound engine. They also come with the RH3 action keyboard. Because of the outstanding sound and key action, they are desirable home pianos for avid learners and advanced players.

The Korg B2 series is suitable for beginning pianists because of its very simple design and minimum digital functions. On the other hand, it features scaled hammer action and really good sound from quality samples. Korg employs a multi-sampling technique per note, hence creating richer and more expressive sounds.

Korg LP380 is a mid-range digital piano. A big selling point of this piano is the RH3 key action. This model is made in Japan and it is known for its exquisite craftsmanship.

Digital pianos have many functions that are not presented in acoustic pianos:

Lately, these functionalities have become standard features in many models across these digital piano brands.

Let’s summarize the unique qualities of these digital piano brands.

In the long history of piano-making, innovation has been an integral part of piano evolution. These five digital piano makers contributed immensely to the digital piano advancement in their own unique ways. They all produce high-quality instruments.

Most importantly, we need to remember that no one brand has the best in everything. Knowing the digital piano makers and their models is a very good start. However, finding the right instrument is a personal choice. In the end, your specific needs, priorities, objectives, and lifestyle are the ultimate determining factors.