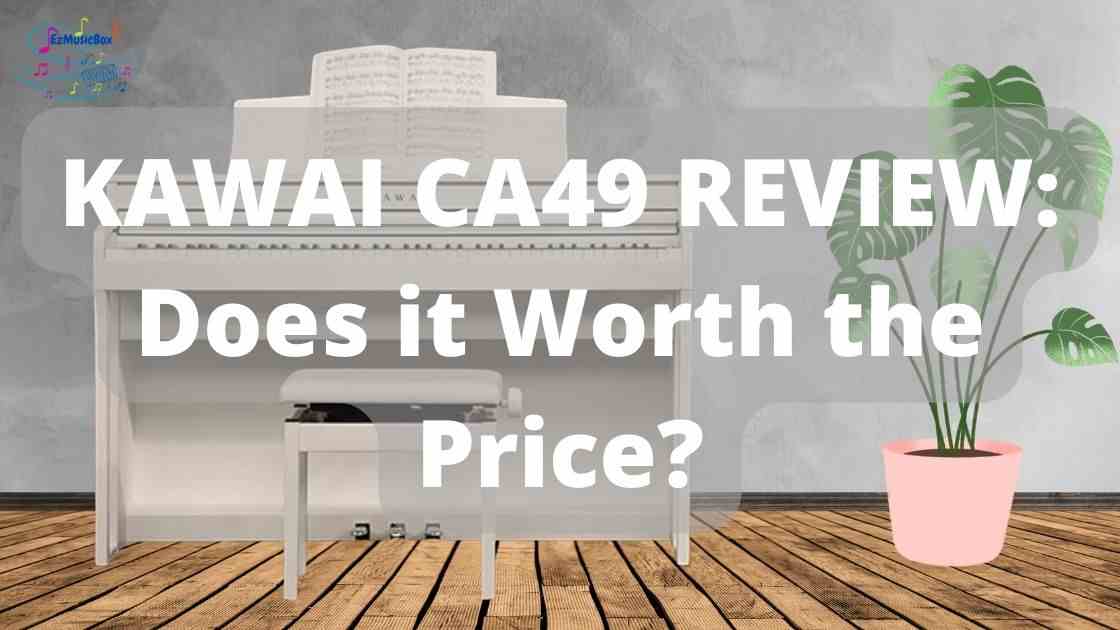 Kawai digital piano CA49 is the successor of the previous popular CA48 from the Concert Artist (CA) lineup. The CA49 has some nice upgrades and improvements from its predecessor. This Kawai CA49 review will have a thorough look at this digital piano.

In terms of the Kawai CA49 review, it is worth noting that the CA49 is very similar to Kawai’s CN-29 digital pianos. When you compare the two spec sheets, there are a lot of commonalities especially the technology behind the design. You may think the CA49 is an upgraded CN-29. However, there are some vital differences:

The CA49 cabinet design is sleek and modern, with rounded top-board and tapered legs. The minimalist look and three options of color (Rosewood, Satin White, and Satin Black) are suitable for any room decor. Moreover, the slim piano fits any small apartment and narrow space.

The wide and adjustable music rest adds a nice touch that suits multiple purposes from editing scores to reading for performers.

The control panel of the CA49 is simple with few buttons for scrolling through the options or sounds. It is not as convenient as direct button selection, however, the 128 x 128 pixel OLED screen provides a clear view of the settings.

The volume slider and power switch are on the right side of the keyboard.

For more details on how to use the control panel, check out the CA49 Owner’s Manual.

The Kawai CA49 is compatible with the free Kawai’s PianoRemote control app for Android and iOS devices. The app’s Virtual Technician allows you to easily adjust the settings and choose a sound from any of your mobile devices.

Now let’s delve in with sound which is the most important aspect of an instrument. Sound is what connects the player and the audience with any instrument. The CA49 is a relatively recent updated edition to the Kawai Concert Artist lineup.

The Kawai CA49 is equipped with beautiful sounds of both the Shigeru Kawai SK-EX Concert Grand Piano and Kawai EX Concert Grand Piano. The EX is an earlier generation of Kawai’s concert grands. Although it has great sounds, it is a bit less refined than the SK-EX. Overall, the SK-EX provides a more expressive color and warmer sound.

Both of these concert grand voices have been done with multi-dimensional samples on every individual note. This is unique with Kawai mid to high-range digital pianos because typically manufacturers of digital pianos do not take individual samples of every single pitch.

Kawai’s individual key multi-channel sampling captures completely accurate audio information of every single note. When you play any note at a pianissimo or at a fortissimo, it isn’t just volume that changes, you also get slight unique characteristics from note to note. As a result, it more closely mimics an acoustic grand piano.

Out of 19 voices, the CA49 has a total of eight acoustic piano sounds. Other sounds include:

One of the acoustic piano sounds is the studio grand piano sound. This sound is based on a shorter-length piano and has a slightly brighter tone, hence it is really good for contemporary pop and jazz style playing.

The CA49 has 192-note polyphony. Polyphony on digital pianos is the maximum number of notes that a piano can sound simultaneously. Nowadays, it is quite standard to have 192-note maximum polyphony for digital pianos at this price range.

The 192-note polyphony allows you to play most music pieces and gives a layer of multiple sounds. It is enough for all levels of players.

While the really great piano sound makes a good piano, it’s also the key touch or the feel of the keys that contributes greatly to the overall playing experience.

The CA49 features Kawai’s Grand Feel Compact wooden keyboard action. As depicted, the key is a very long wooden stick, and more importantly, there it has little balance pins in the middle that is the same as the keys on an acoustic grand piano. This means the key is pivoting on the balance pin, hence it creates a seesaw-type mechanism.

Additionally, the tri-sensor system controls the weighted hammer. Along with the long wooden keys, the player gets more control and more leverage that allowing a enhanced expressive play experience, especially for a very delicate and gentle touch.

Moreover, the keys of CA49 have a matte finish on both white and black keys. The key bottom feels cushy and soft. Compared to other brands of digital pianos, Kawai’s key bottom probably is the softest. Additionally, the repetition speed on this instrument is really great and very responsive.

It offers two layers of different sounds. You can combine the tone with a harpschord, electric piano, strings, or any voice you like.

In dual mode, you can mix or layer any two sounds you want together. For example, you have the sound of the piano and the string ensemble mixed together in every single key. You can play an orchestra. This is really a lot of fun. Additionally, you can adjust the main and layered sound volume balance individually.

This is also known as four hand mode. It splits the piano into two sections. This is the best option for student/teacher experience.

By employing the octave shift function, the duet mode can have two sections with two middle C and octave ranges. For instance, a teacher can play tunes on the left side of the keyboard as the student follows on the right side.

As part of the Kawai CA49 review, let’s take a look at its connectivity. The CA49 features Bluetooth® MIDI, USB-MIDI, App Support, an Impressive four-speaker system, and Spatial Headphone sound.

When the Bluetooth MIDI function is enabled, the CA49 can be wirelessly connected to any mobile device of your choice.

You can use a wide range of music-related apps to listen to and learn your songs. Kawai offers free PianoRemote and PianoBookPlayer apps for iOS/Android devices.

Using headphones to play the piano enables you to play quietly without disturbing others in the household. The CA49 has two headphone jacks, one standard 1/4″ headphone jack, and one 1/8″ stereo jack.

When you are using headphones on CA49, it offers Kawai’s Spatial Headphone Sound (SHS) technology which gives you an ambient or surrounding type of sound through your headphones. Hence a more enjoyable music experience. The SHS quality also helps to reduce auditory fatigue when listening for extended periods of time.

This USB Type B port allows you to connect to a computer to exchange MIDI data.

You may also leverage this port to connect to your smart device and use the PianoRemote app to visually manage the CA49 settings and selections.

The Kawai CA49 has great sounds, especially its outstanding Shigeru Kawai SK-EX and Kawai EX concert grand piano sounds. The intent of this digital piano is clearly to act as a replacement or an alternate to an upright piano or a baby grand. Given almost half of the 19 tones are acoustic piano sounds, the vast majority of its users are going to enjoy it as a piano.

At the price range of Kawai CA49, it is really remarkable to get a real piano wooden key feel.

To conclude the Kawai CA49 review, I would say that the CA49 is a wonderful digital piano that provides a true high-end acoustic piano experience in a contemporary slim console.