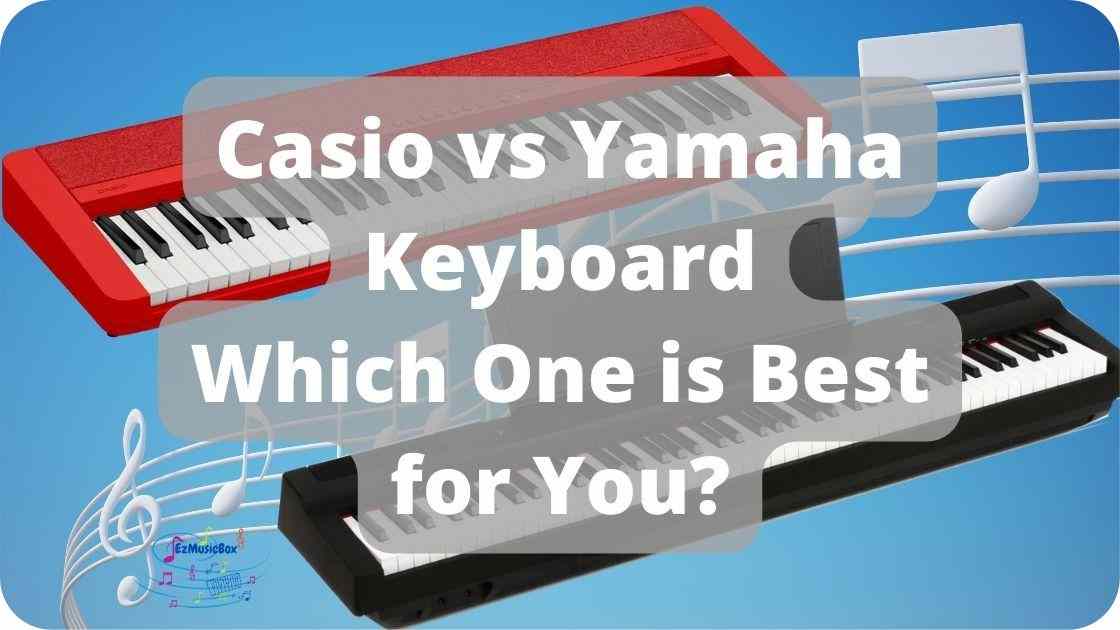 If you are in the market for an electric keyboard, it is most likely that Casio and Yamaha are the two top brands showing up in your search. Casio vs Yamaha keyboards, which one is best for you? In this article, we will make a head-to-head comparison and share our honest opinions.

For more information about keyboards vs pianos and weighted keys, check out our articles:

In terms of Casio vs Yamaha keyboards or digital pianos, Casio provides more options for keyboards while Yamaha offers more digital piano models with some high-end choices. Let’s take a closer look at the details.

The Reputations of the Brands

When it comes to keyboards and digital pianos, both Casio and Yamaha are leaders in the industry. However, Yamaha may be more recognizable for its piano products, especially since it produces some outstanding acoustic pianos that fill homes and the world’s most prestigious concert halls.

Casio Brand on the other hand is the most familiar electronics brand. The Japanese International electronics manufacturing company was established in 1946. Its products range from calculators to watches, and electronic musical instruments. In 1980, Casio introduced Casiotone electric keyboard. Since then, Casio’s lightweight and affordable keyboards reached millions of households worldwide.

Both brands have a reputation for producing many excellent keyboards and digital pianos. Therefore, our discussion here is focusing on a few key characteristics related to digital pianos:

Since it is impossible to cover every model by both digital piano makers, by reviewing these aspects with examples, we’ll have a meaningful comparison of Casio vs Yamaha keyboards.

The sound is the most obvious yet important aspect of any musical instrument. While Casio and Yamaha use different technology for their sound sampling, both feature outstanding piano sounds in their digital piano models.

Furthermore, the AiR technology reproduces sounds using Casio’s proprietary technique of Multi-dimensional Morphing. Thus it provides rich and resonating tones that you would expect only from an acoustic piano. AiR simulates the resonance like the sound bounce within an acoustic piano chamber.

Thus, with the CF Sound samplings along with the powerful onboard speakers, Yamaha offers its digital piano players an expressive acoustic piano experience.

Now let’s put Casio PX-870 and Yamaha YDP-144 side by side to see how the sounds are measuring up against each other.

Although the Casio Privia PX-870 and Yamaha Arius YDP-144 are in a similar price range, the YDP-144 has been on the market longer than the PX-870. With the rapid technological evolution in the digital piano space, a couple of years can make some difference. Therefore, the PX-870 has responded to the Yamaha YDP-144 with slightly better and stronger specifications.

Let’s talk about the sounds of these two instruments. As we mentioned earlier, Casio and Yamaha use different technology and sound samplings, hence the main piano sounds are quite different in tone characters.

The Yamaha YDP-144 has a bit low and rough sound feel and it got more of an emphasis in the upper mid-range. Additionally, YDP-144 has enhanced bass and treble, but the mid-range is slightly flattened.

The PX-870 on the other hand has the traditional equalization curve with some bass and treble enhancements.

The bottom line is that both sounds are really good. It is hard to say which is better because it is truly a personal taste. Regardless, sound preference is the absolute most important part when it comes to choosing a piano and it is always going to be subjective.

The maximum polyphony is also different in these two models. The PX-870 has 256 notes and the YDP-144 has 192 notes. In reality, both of these numbers are totally sufficient, unless you use the instruments do to some studio recording work or play some really complicated pieces, then a maximum of 256 notes of polyphony will have an edge.

Check out our full reviews of CASIO PX-870 and YAMAHA YDP-144 for more detailed information.

Keyboard or Digital piano key action and touch response directly affect your learning and playing experience. If you are after a true piano experience, you need to choose a keyboard with graded or scaled hammer action. This means the keys of a digital piano are touch sensitive, the harder you press the key the loud the sound. The graded or scaled hammer action basically means that the low notes play heavier and the higher notes play lighter mimicking the real piano feel.

Most the Casio’s digital pianos are equipped with Tri-Sensor Scaled Hammer Action keyboards. They use the hammer action just like grand pianos without springs.

The Tri-Sensor System enables the keys to respond solidly and naturally. This brings the keyboard, even more, closer to a traditional grand piano. The Tri-Sensor additionally enhances the ability to play the same note in quick succession.

Yamaha’s term for its 88-key graded weighted keyboard is the Graded Hammer Standard (GHS). This action has a dual sensor system and is mostly available on Yamaha’s portable P-Series pianos. Thus, it is excellent for beginners and not difficult to transition to acoustic pianos.

The Graded Hammer 3 (GH3) action is found on more expensive Yamaha digital pianos, for instance, the ARIUS Series. Notably, the GH3 has a three-sensor configuration.

One noticeable difference between Casio vs Yamaha keyboards, Casio features digital pianos with nice textures on white and black keys that enhance the key touch. On the other hand, Yamaha digital pianos usually do not have texture on the white keys, only on the black keys.

Both Yamaha and Casio offer some very affordable keyboards. Many of the 61-key or 76-key portable keyboards sell for under 300 US dollars. Few models even come with touch sensitivity which can be a decent beginner piano. The below table lists a few keyboards from Casio and Yamaha that have less than 88 keys. Their prices are very comparable.

Let’s do a side-by-side comparison of two of the most affordable digital pianos with 88-day standard keyboards: Casio CD-S160 vs Yamaha P45.

Yamaha also offers model P71, an Amazon-exclusive version with no functional difference from the P45. The only difference may be the price.

The Yamaha P45 and the Casio CDP-S160 are the cheapest digital pianos you can buy. It is less than a $50 difference on Amazon.com between these two instruments and the price difference is even narrower between P71 and CDP-S160. This clearly indicates the two Japanese digital piano giants are trying to capture the price-sensitive markets.

Both the P45 and the CDP-S160 have 88 full-size keys and a graded Hammer action. However, the response of these two keys cannot be more different.

I prefer the key action on the Yamaha P45 which has a firmer weight and is quieter. In contrast, the action on the Casio CDP-S160 has a lighter feel and is less cushioned.

On the other hand, I love the matte and textured white and black keys on the CDP-S160 which simulate natural ivory and ebony that provide a better hold for my hand. The black keys on the P45 have a matte finish but the white keys are glossy.

So it is boiled down to key action or texture. I personally prefer Yamaha’s Graded Hammer Standard (GHS) action on P45.

The sound engine capability on both instruments is very similar. Both feature 64-note polyphony and 10 voices but the voice selections on these pianos are very different.

The Casio CDP-S160 comes with three grand piano voices while the Yamaha P45 comes with just two grand piano tones. See a full list in the below table. It is really a personal choice of what voices you prefer to have on your digital piano.

While both these pianos allow you to layer two voices at the same time the P45 allows you to balance the volume of the two voice layers but you cannot do it on the CDP-S160. Neither instrument has the option to split the keyboard for different sounds.

Although the CDP-S160 is a more compact unit it manages to pack in a more powerful amplification system, a pair of 8 watts amplifiers give you an output of16 watts versus the 12 watts output on the P45.

Both brands include a basic foot switch functioning as a sustain pedal. For advanced players who use soft and sostenuto pedals, you will appreciate Casio’s optional triple pedal unit.

Yamaha considers the P45 as a beginner piano, therefore it does not support a triple pedal system.

Home or Stage Use

As aforementioned that both Casio and Yamaha put out many high-quality keyboards and digital pianos on the market. When deciding on a model to purchase, one of the important questions is whether the instrument is for home or studio use, or it is for the stage. If it is for home or studio use, you probably want to get a console-style digital piano. On the other hand, if you want the piano for stage or gig use, find a portable one. Casio and Yamaha offer both styles. Check out our Best Digital Piano Reviews for either style.

That being said, please keep in mind that many portable ones can be easily converted into console-style pianos for home or studio use. Generally, the portables are cheaper than the console styles.

If portability is a high priority for you, you may choose Casio keyboards or digital pianos. Casio puts out the slimmest and lightest models with more output power in similar price-range instruments.

On the other hand, for home or studio use, size and weight are usually not as critical. You probably focus more on your preferred sounds and key actions.

In terms of Casio vs Yamaha keyboards, it is almost impossible for us to tell you which keyboard or digital piano that will meet your specific objectives. Additionally, personal preferences are also important considerations, especially when it comes to sounds and key actions.

For my personal home or lesson studio use, I most likely will pick Yamaha over Casio for its sounds and actions. However, for gigging or stage use, I probably will go for Casio for its portability and digital functions.

Once again, it is critical to evaluate the purpose of your use of the instrument and pick the best one to meet your goal. For more questions, please do not hesitate to leave comments below.