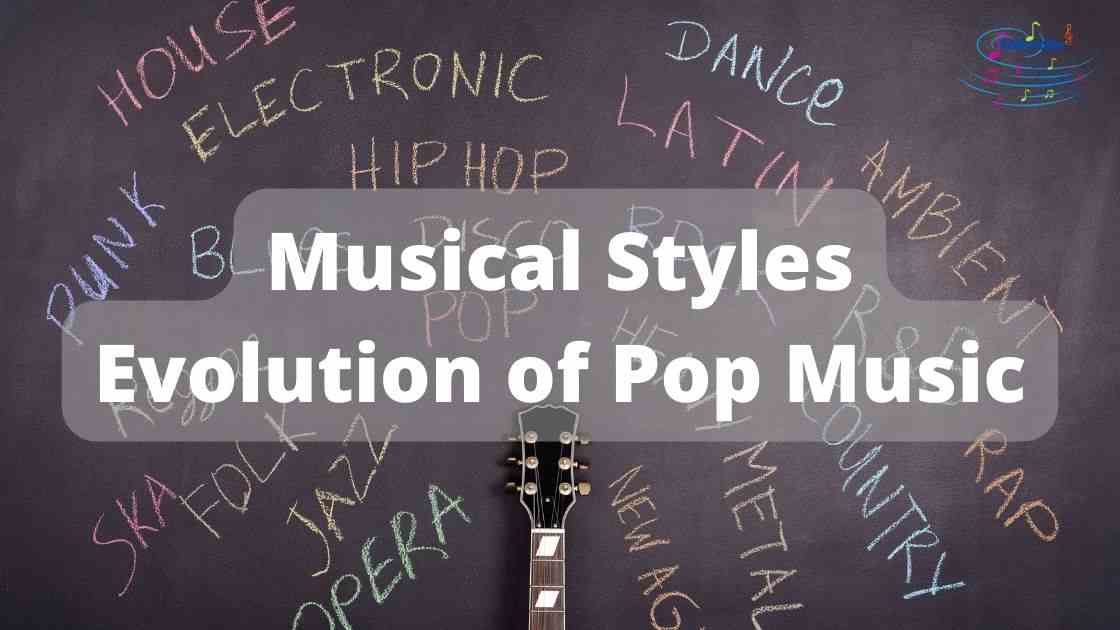 Over the last century, musical styles have experienced a most diversified and conflicting period. Indeed, the art of music turned into mostly unprecedented new ways of musical expression.

There are numerous types of music existing around the world which are known as music genres. Genre in musical terminology is a fancy word for “type of music.”

In our Listening to Music Series, we discussed classical music vs popular music. Additionally, we shared more detail about Western music history in another post.

In this article, we are reviewing the musical styles in popular music in the West and their evolution over the last hundred years with a focus on the changes in the music expressing melody, harmony, rhythm, and tone color, not necessarily repeating listing music genres and styles.

Popular music appeals to a large population. It is simple and direct, and it is continuously evolving. Culture and society have greatly influenced musical progression, and the different musical styles blend to create new styles.

Compared to melodies of the Classical or Romantic period that were typically smooth, diatonic, and conjunct, modern or post-modern melodies tend to be fragmented and angular.

The composers and musicians are more likely to avoid conjunct and stepwise musical lines, instead going for an octave displacement to replace an in-step tone with a more distant one, either an octave above or below.

The basic building block of Western music is the triad, a three-note chord that creates consonant harmony. Traditionally, composers might use dissonance (a non-triad tone) to create variations and tensions. Yet, the rules of consonant harmony required that a dissonant pitch move back to a consonant one.

Progressive composers use much more dissonance in their music pieces, like jazz and metal music styles. The composers created dissonance not only by obscuring or distorting the traditional triad but also by introducing new chords.

Regular patterns of rhythm and tempo govern classical music and most pop and rock music of the present day. While you can tap along with classical music, the tempo and rhythm are more or less an invisible line that rules the music.

On the contrary, the rhythm and tempo are the underscores of popular music like disco, hip-hop, etc.

For the harsh realities of the modern world, a wave of new sound was born. The traditional string-dominated tone is replaced by sharper and crisper woodwind sounds, plus the emphasis on percussive effects. Even the piano, conventionally considered a lyrical singing tone, came to be used more as a percussion instrument in modern music.

New instruments were invented to express musical sounds. The electric guitar, synthesizer, and keyboard bring new colors to the music.

It is nearly impossible to generalize musical styles for modern-day music; however, the musical evolution has removed the barriers amongst different musical arts, for instance, rap in Broadway musical shows or symphony orchestras playing video game music, etc.

Moreover, contemporary musical styles continue to be influenced by technological advancements that appear in –